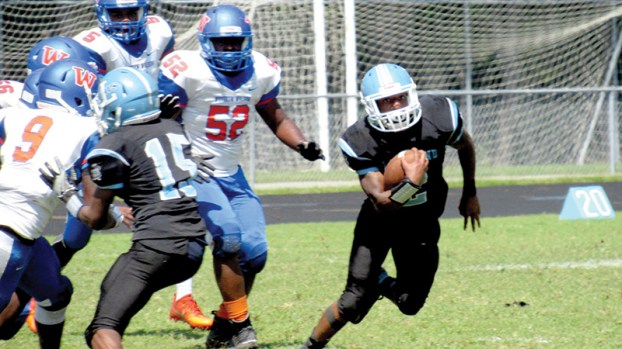 Lakeland is now officially 1-0 on the season. They completed the final nine minutes at home Monday afternoon and got the win.

When the game was stopped Friday, the Cavs had a 19-7 lead. They finished Monday winning 26-14.

Lakeland coach Kevin Knight felt like there were things his team could have done better but overall was happy to get a win.

“Of course you feel good about the win, but I feel we left a lot of points on the board,” Knight said. “We still have a lot of work to do.”

Lakeland went up 26-7 with 3:39 left to play until Wilson followed with a touchdown through the air to cut the deficit to 26-14. On the following possession for Lakeland, they put together a solid drive to get down into Wilson territory before fumbling. Wilson recovered and put their own drive together before throwing an interception that ended their chances of coming back.

“Credit to the defense — they were flying around and making plays since last Friday,” Knight said. “We had to make a play there at the end, and the guys came up with the interception. The guys really stepped it up.”

Tyriq Rawlings had a big game for the Cavs, stepping in the footsteps left behind by Damontra Milteer. Rawlings knows that much of the talk around him this season will be how he handles the role as the lead running back. He rushed for more than 100 yards and had two touchdowns. He scored the team’s final touchdown.

“Everyone knows the player Damontra was. Those are big shoes to fill,” Rawlings said. “But with hard work and dedication, I can fulfill that role. I felt good about my performance. My offensive line was doing their jobs, and I saw the hole and hit it.”

Jordan Porter and Nate Edgehill both had explosive touchdowns for Lakeland last Friday night. Quarterback Tyquan Holloman continued to make good decisions with the football, as he had no turnovers.

Lakeland will now turn its attention to Indian River High School, whom the Cavs will play on the road this Friday.