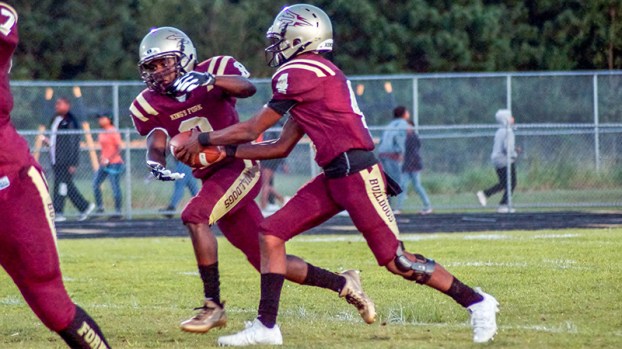 A touchdown in the waning seconds of the game gave King’s Fork High School its first loss of the football season.

The Bulldogs put on a solid display of physical football Friday night, but they wound up just short, falling 23-20 to Western Branch High School.

It was a close loss that the Bulldogs admit will hurt for a while.

“The kids worked hard, and they played their hearts out,” Bulldogs coach Scottie Littles said. “I’m very proud of the way they played. They never quit, and they never gave in. We just came out on the wrong end.”

Littles told his players to learn from this situation, because that same situation can show up later in the season, and they will be right there when it’s time to make the play.

Statistically, the Bulldogs outgained Western Branch 392-193. If it weren’t for penalties committed by King’s Fork, the Bulldogs could have had well over 400 yards of offense.

Neither team scored a point in the first quarter. King’s Fork had a 7-0 lead after the second quarter. A run by quarterback Justin German put King’s Fork on the board.

In the third quarter, Western Branch finally got on the board, and a two-point conversion gave them an 8-7 lead.

KFHS Senior Darran Butts scored back-to-back touchdowns to give the Bulldogs what seemed like a comfortable 20-8 lead. At the bottom of the third quarter, Western Branch got on the board again before the quarter closed out, trimming the King’s Fork lead to five.

“Our defense played good all night,” Littles said. “Western Branch made a play when it counted.”

“That game hurt,” German said. “It hurt us really bad knowing we had them and couldn’t finish. Now we have to bounce back and get ready for Hickory.”

King’s Fork will get things corrected from this game and shift their focus to Hickory High School. The Bulldogs are 1-1, and the season is still young, so even though the loss hurts, there is a lot of football to be played.

“I tell the guys the sun rises again the next day,” Littles said. “It’s a process, and we are going to get better. We are going to figure some things out and get better each day.”

Braves break away from Cavs

A slow start and tough second half by Lakeland High School ended in a 52-12 football loss for the Cavs... read more