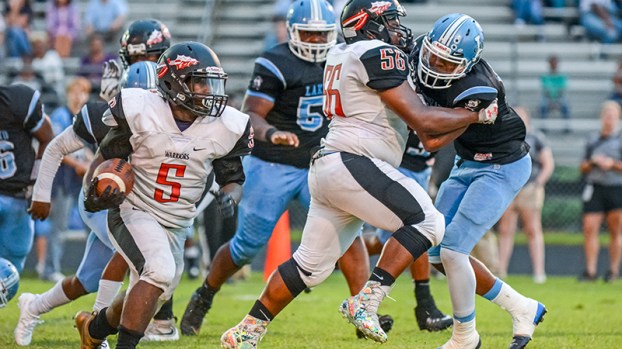 All four Suffolk School teams will be in action this week, with the Bulldogs and Warriors facing off.

The Warriors will face their second of the two Suffolk teams, while the Bulldogs will be facing their first. If the Warriors can add a win Friday, they will be the city champions as they were last season.

Both teams come into this game with strong starts, having only one loss each. Nansemond River took its first loss of the season last week against Indian River High School, while the Bulldogs are coming off of a big homecoming win against Grassfield High School. Both teams are ranked in the top five of their regions in the VHSL rankings. 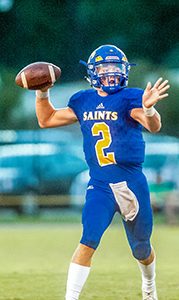 For King’s Fork to get a victory on the road Friday, it will have to start with stopping the Warriors’ rushing attack. Jaquan Brayboy and Wali Faulk have been successful running between and outside of the tackles this season for the Warriors. Quarterback Kori Riddick can also use his feet when need be as well. On the outside, the Warriors have Kevin Johnson who can make plays as well. Bulldogs coach Scottie Littles says that the Warriors possess the best rushing attack they have seen so far and might have one of the best in the area.

As with most rivalry games, this game will come with pride, high-intensity and edgy competitiveness. A level of focus from each team will be required to overcome the distractions.

Defensively, the Warriors will have to contain a King’s Fork offense that possesses many playmakers and averages 36 points a game. Darran Butts, the team’s leading rusher, has eclipsed 100-plus yards in each of the four games. Justin German has been able to spread the ball around and make plays from the passing game for the Bulldogs. Last season, German did not face the Warriors due to an injury. Along with Butts and German, Sam Dunn has made plays on both sides of the ball, and Bobby Boone got into the end zone for the Bulldogs last week. Cherrod Joe always poses a threat on the outside. However, the Warriors have been relentless getting to the quarterback and hopes it can pay off again today.

The Warriors have had a good week of preparation and feel they will be ready for tonight.

“We have to all be on the same page and play our hearts out,” Brayboy said. “If we want to win this game, communication and leadership will be important. Everybody just has to play their role.”

Lakeland will try to bounce back from three straight losses as they go on the road and take on Western Branch. The Cavs are hopeful to get back into a rhythm after a shutout loss to Oscar Smith last weekend.

“We knew the top half of our schedule would be tough this year,” Cavs coach Kevin Knight said. “Every team we lost to so far, we lost to last season. The guys are playing hard and battling. All we have to do is come together, and we should be successful this week.”

Western Branch’s offense is centered around running the ball. They have different formations they can throw at the Cavs. However, the Cavs feel they are prepared for whatever they may see.

Offensively, the Cavs spent extra time working on their offensive line this week. The whole offensively line is new this year, as they returned no starters from last year’s team. Expect the junior quarterback to be a big part of the offense this week for the Cavs, as they may try to air it out against the Bruins.

“I expect for us to be able to protect the quarterback this week as well as be efficient on offense,” Knight said. “We will definitely need to play sound football and physical football and just execute the game plan. If we do that we should be fine.”

Lakeland will be on the road at Western Branch at 7 p.m. Friday.

The Saints will get back on the road for the fourth away game this season. They will face a St. Anne’s Belfield team coming off of a 55-7 loss. NSA is coming off of its second win of the season against Portsmouth Christian. The Saints offense exploded for 50 points last week, and quarterback Robby Tew tossed five touchdowns.

Coach Mike Biehl has been getting running back George Pettaway involved more, and it has paid dividends, as he rushed for 111 yards and a touchdown last weekend.

Last year, the Saints won 20-18, but the game was on their home field. After the Saints’ win last week, coach Mike Biehl said he felt his team felt it is now expected to play at a high level every game.

“We believe what we are capable of,” Biehl said. “Our energy was like, ‘I know we can win’ instead of ‘I hope we do.’ That’s what is going to take us over the top.”

If the offense continues the performance they had last week, the Saints can even their record up.