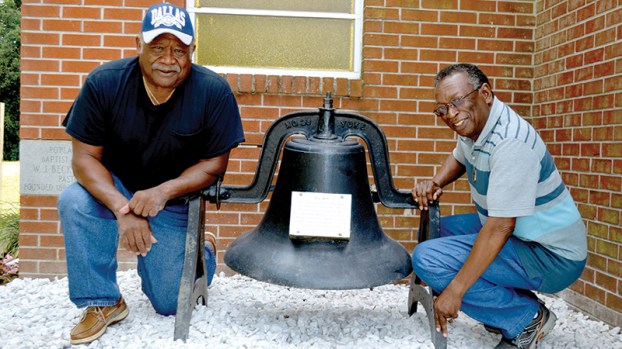 Poplar Run Baptist Church members Eugene Snipes and Randolph Bremby with the church bell from the original church building on Bennett’s Pasture Road. The bell had been removed after a fire destroyed the original building in 1968.

A Suffolk church was recently reunited with a piece of its history.

On Saturday, members of Poplar Run Baptist Church on Bennett’s Pasture Road reclaimed a church bell that once hung in the church’s original building. The bell was retrieved from Driver Volunteer Fire Department less than two miles down the road, where it had been kept for decades.

Church members Randolph Bremby and Eugene Snipes arrived at the fire station Saturday morning with two other members. The steel bell was unbolted from the concrete slab at the station and moved with a borrowed motor lift, Snipes said.

Firefighters helped place the heavy antique into a trailer. The bell was placed in a rock bed at the church that afternoon, along with a plaque detailing the bell’s history that was provided by the firefighters, Snipes said.

“It was a pretty smooth operation,” Bremby said.

Bremby, a member of the church for more than 60 years, grew up hearing then-Pastor W.J. Beckett Jr. ring the bell with ropes as it hung from the steeple.

“You could hear it all the way down the road,” Bremby said.

He remembered standing by in disbelief with others when a fire destroyed the old wooden church in December 1968. Driver Volunteer Fire Department responded, and Walter Price and assistant chief Jimmie Whedbee were credited with the bell’s recovery, according to church documents.

“Everything was destroyed, except the bell,” Bremby said.

The bell was moved to the former Driver Volunteer Fire Station on Kings Highway and later was relocated to the Bennett’s Pasture Road station when the department moved there. According to church documents, the church last attempted to move the bell in 1999, but they did not follow through with the matter at that time.

The reunion finally came after Suffolk Fire and Rescue personnel responded to a call at Poplar Run Baptist several weeks ago. Personnel saw a framed piece of paper at the church that explained how the bell was still at the Driver volunteer fire station, according to Driver Volunteer Fire Chief James Gray.

Suffolk Fire and Rescue leadership then contacted Gray about allowing church members to retrieve their bell.

“I knew there was a bell in front of the fire station, but I didn’t know what the back story of it was,” Gray said. “We really didn’t know anything about them wanting the bell back. We reached out to the church and said ‘Hey, if you want the bell, you’re more than welcome to come get it.’”

Snipes said the congregation will soon plan a ceremony in honor of the bell being returned to the church. He said folks on Sunday were already complimentary about it.

Like Snipes and others, Bremby was just excited to have a piece of the original church back where it belongs.

“Most of the members are glad to get it back home,” he said.