The golf season came to an end for King’s Fork High School when the Bulldogs finished seventh in the 4A regionals.

The first golf season under coach Robert Casteen’s direction has come to an end. King’s Fork went up to Williamsburg to participate in the 4A regional golf tournament at Williamsburg National Golf Course and took seventh out of 13 teams.

“It was a good experience,” Casteen said. “It was the first time most of my guys experienced that type of tournament with all of those teams there, but they did well.”

Hunter Ruggiero was the only Bulldog to qualify for the second day. However, due to an injury, Adam Briggs took his place instead on the second day. Overall, the course and structure of the tournament was nice, according to Casteen. 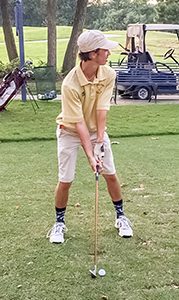 Hunter Ruggiero was the only Bulldog to advance to day two of the 4A regional tournament but was unable to compete due to injury. The Bulldogs placed seventh.

Looking back on the season now, Casteen believes his team had a successful season. From where the guys started in August to where they ended up in October showed progress. Casteen enjoyed his senior group and what they were able to do for the team this year.

One point Casteen drove home all season long was team chemistry. He felt like that happened, and he is hoping it can continue even with the season being over. Casteen also coaches baseball in the spring and will be with some of his players who played golf this season.

“I’m hoping the younger guys can continue to build that chemistry,” Casteen said. “All of the guys have already talked about getting together with one another now that the season is over. They want to continue playing on their own outside of just what we do at practice.”

The first win of the season against Deep Creek High School proved to be one of the team’s favorite moments of the season. Also, during matches, the Bulldogs told their coach they were going to shoot better than they did the match before, and they’d accomplish that. As a coach, that was one of the fulfilling things Casteen was glad to be a part of.

“Just watching guys do what they can to make themselves better is the biggest highlight of the year,” Casteen said.