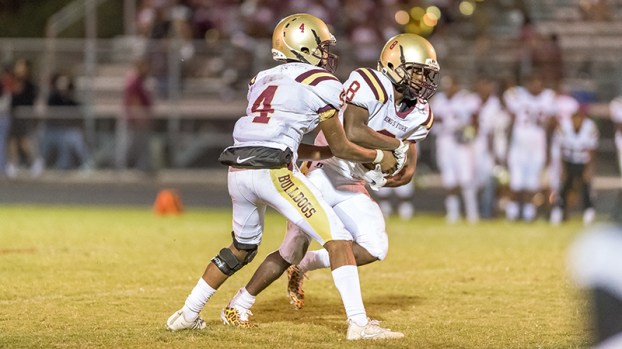 Justin German and Darran Butts work the read-option. Butts had 192 yards and four touchdowns for the Bulldogs. German completed all nine of his passes against Great Bridge High School.

King’s Fork High School won its fourth game in a row on Friday with a 53-6 rout of Great Bridge.

An explosive night for the King’s Fork offense, defense and special teams resulted in the Bulldogs’ highest point total of the season.

Bulldogs coach Scottie Littles said this was his team’s best game of the season when it comes to penalties.

“We did what we said we wanted to do, which was to be consistent, play with discipline and be mature,” he said. “We didn’t really shoot ourselves in the foot, and we made things happen in every facet of the game.”

King’s Fork put up nearly 40 points in the first quarter.

Quarterback Justin German went 9-9 for 203 yards and two touchdowns. Cherrod Joe was the main recipient of German’s passes, catching six for 106 yards and a touchdown. Chris Shearin totaled two touchdowns — one on a punt return and one running the ball.

The defensive line also had an impressive game, disrupting a lot of what Great Bridge wanted to do.

“We have been playing great lately,” Shearin said. “I’m proud to be a part of this team.”

“We’ve been playing with a different mindset lately,” German said. “We told ourselves after the Western Branch loss that it’s our time.”

Littles said his team can’t afford to take its foot off the gas with a new challenge every week in the Southeastern District.

“Each week a new opponent offers a different challenge,” he said. “We don’t have the luxury to sit back and say, ‘Let’s relax,’ because if we do that we lose what we’ve got going on right now.”

King’s Fork will host Indian River High School on Friday. That game should be one of the premier matchups for the weekend.

“It’s going to be a great atmosphere,” Littles said. “They are a great team, and we are excited about the challenge.”

A 24-8 road loss against Deep Creek High School on Friday leaves the Lakeland Cavaliers in a big hole for... read more