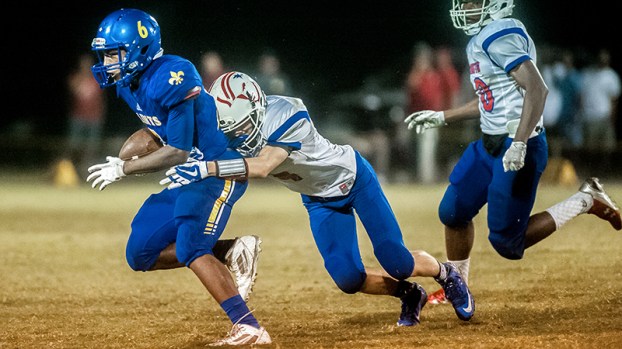 George Pettaway shaking off a defender during a run. The Saints will host Norfolk Academy for homecoming today at 7 p.m. Sam Mizelle photo

Two Suffolk schools will have homecoming games on Friday for game seven of the season.

Lakeland will be enjoying the festivities of homecoming week while also trying to get back on track. The Cavs have lost five straight games but have a good opportunity to bounce back against a Grassfield team with two wins.

Last week, the Cavs took a 20-8 loss to Deep Creek High School. It was the one of the most frustrating games coach Kevin Knight had been a part of. Lakeland routinely hurt themselves with conduct penalties, which helped Deep Creek get the win. This week, Knight says preparation has been solid, and he feels his team is ready to bounce back today.

Lakeland has always stressed taking care of their home field. Even though they have two losses there this season, they are hoping to change things for homecoming. They know fans, alumni, faculty and staff all want to be able to enjoy homecoming weekend with a win.

Lakeland will host Grassfield for homecoming at 7 p.m.

NSA returns from its bye week with a homecoming matchup against Norfolk Academy. The Saints are in the midst of a three-game winning streak. Norfolk Academy, with one loss, is ranked among the top three teams of Virginia Independent Schools Athletic Association Division I polls. NSA will have to play its best, and coach Mike Biehl added it will take “everybody” for the Saints to get a homecoming win this weekend.

Homecoming week can provide a distraction, but Biehl believes his team has been handling it well.

“I think our guys understand how big this game is for us,” Biehl said. “Overall, I’ve been impressed with practice this week and where we are. We’ve added a couple of new things and I’m looking forward to Friday.”

Last year, NA defeated NSA 36-65 at home. Biehl came away from that game saying NA is a well-coached team in every facet of the game. NSA will have to contain the Bulldogs’ running game while also looking out for the motions and movements before the ball is snapped.

What it comes down to for NSA is doing what they’ve planned to do. With the magnitude of homecoming, the Saints know it is not a regular game. A win will also add significant momentum towards the Saints’ playoff position.

“It’s a Division I team coming into our place,” Biehl said. “We are on the wave of a three-game winning streak. To make it four against this team will be unbelievable.”

The Bulldogs and Braves will match up as one of the premier games for the weekend. King’s Fork returns home after being on the road three of the last four games. King’s Fork also is coming off of its highest point total of the season in a 53-6 victory over Great Bridge High School.

Coach Scottie Littles believes that the Southeastern District is one of the best football districts in Virginia because of the quality of the teams. The game Friday will be against two of the top five teams in the district.

“Indian River is a good team that provides a lot of different challenges,” Littles said. “They are a lot like us. They have a lot of athletes all over the field. They are balanced.”

Offensively, Indian River has scored at least 50 points in three games this year. They have weapons on offense the Bulldogs will need to account for. In a case of a shootout on the scoreboard, Indian River has the talent to go score for score.

Darran Butts has continued to blaze the field from the backfield. He had nearly 200 yards on six carries last week and added four touchdowns. Justin German was perfect from behind center, while Chris Shearin added a special teams score. In the last three games, the Bulldogs have put up 146 points. Littles believes his offense is starting to catch its stride after not playing as well at the beginning of the season.

“Players are confident in their roles and understand their roles,” Littles said. We are just trying to get better day by day, week by week.”

After starting the season 3-0, the Warriors are looking to get back on track after three straight losses. Nansemond River is coming off of a 38-7 loss to Oscar Smith High School. One thing the Warriors were able to accomplish against the Tigers is that they were able to get on the scoreboard. It was the first time it happened in district play against Oscar Smith this season.

If the Warriors get out to an early lead on Western Branch, they have to make sure they continue to build on that. The Bruins have shown they can win close games if need be.