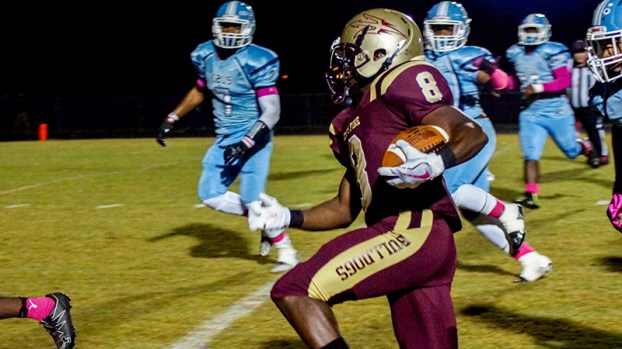 Bulldogs, Saints to build off wins

With only two games left in the regular season, all Suffolk schools will try to make a strong playoff push on Friday.

The Bulldogs will have arguably the toughest last two games in the district to finish their regular season. King’s Fork will go on the road today and face a one-loss Deep Creek team and then finish with an undefeated Oscar Smith High School. King’s Fork is also riding high on a six-game win streak.

Coach Scottie Littles has stated he believes the Southeastern District features some of the best football in Virginia. He believes every week is a test, and the test this week features two of the top five teams in the 4A region. The Hornets are in first place in the top 20 weekly ranking in the 4A region, while the Bulldogs are No. 4.

Deep Creek offense is centered around its running back. The Bulldogs defense has been stout all year long, and they will need to take it to another level to get a win Friday. 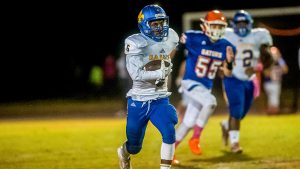 George Pettaway breaks out a big run for the Saints in a prior game against the Greenbrier Christian Academy Gators. Nansemond-Suffolk Academy will take on Atlantic Shores Christian School at home at 7 p.m. Friday.
Sam Mizelle Photo

The Hornets will also have to account for the Bulldogs’ explosive offense, which features many weapons. It starts with Darran Butts, who leads the district in rushing. He ran for 202 yards last week in a win over Lakeland High School. If Deep Creek wants to limit Butts, the Bulldogs have quarterback Justin German, who has proven he can win games with his arm if need be.

Sam Dunn, Cherrod Joe and Bobby Boone are among others who provide weapons for German to spread the ball around with. King’s Fork will need to be efficient on offense, as Deep Creek allows only nine points a game on average and has three shutouts on the year.

King’s Fork will be at Deep Creek today at 7 p.m.

Robby Tew had an impressive game for the Saints last, week accounting for five touchdowns. Freshman George Pettaway also provided a spark for the Saints, with two rushing touchdowns and a receiving touchdown. Those players, along with Erek Smith and others, will need to build off their performances to continue to put the Saints in position to try to make the playoffs.

Last week, Biehl spoke about his team having a sense of urgency now that the season is coming close to an end. He and his players are not ready to let the season end just yet.

NSA will be at home against Atlantic Shores at 7 p.m. Friday.

After a road loss to Deep Creek High School last week, the Warriors will have a chance to get back on track against Great Bridge. The Wildcats are currently winless and have given up at least 34 points in each of their games this season.

Nansemond River has shown at times this season that it is capable of being a really good offense. The ground game has always been a focus of the Warriors on offense, as the rushing attack dictates the flow.

The Warriors also have playmakers on the outside that can make things happen as well as on special teams.

Nansemond River will be at Great Bridge at 7 p.m. Friday.

Lakeland will have its last home game of the regular season against Hickory on Friday. Even though Lakeland has won only two games this season, their play hasn’t been indicative of their record. They have two losses that were by a combined seven points and have been competitive at some point in nearly every game this season.

In the Cavs game against King’s Fork last week, turnovers derailed any momentum the Cavs wanted to have. However, the defense has been playing well for the Cavs. Hickory is coming off of a 35-0 loss to Grassfield High School. The Cavs defeated the same Grassfield team two weeks ago for their homecoming.

Getting a win over Class 5 and 6 schools will help Lakeland in its attempt to secure a playoff spot, since they are a Class 3 team.

Lakeland will be at home against Hickory at 7 p.m. Friday.

After a 3-0 victory over Hampton Roads Academy on Tuesday night, the Lady Saints clinched the No. 1 seed in... read more