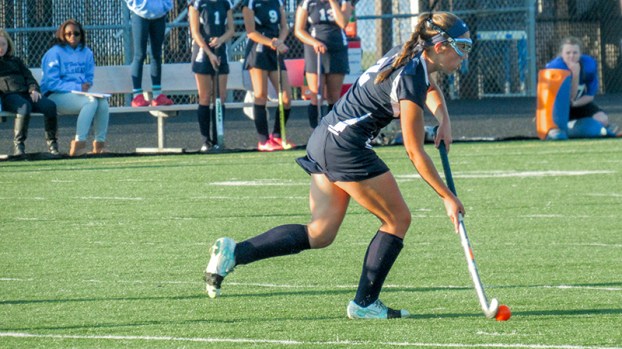 Alex Kinsey gets the ball up the field for the Lady Cavs in a prior game. Lakeland High School finished seventh in the Southeastern District this season.

A 6-2 loss to York High School in the quarterfinals of the 3A regional tournament ended Lakeland High School’s field hockey season.

Lakeland traveled to York High School Monday for the quarterfinals and started off the game keeping pace. York scored first, and then Lakeland matched their goal.

Both teams went into halftime tied at two. Julie Jones scored a goal with an assist from Sarah Stansick, and Sydney Beale scored the other goal.

“I thought we had played really well,” Lakeland coach Cortney Parker said. “We had some good looks in the second half but just couldn’t get them in the goal. York had some quality shots in the second half. I am proud of how they played. They fought until the end.”

Lakeland placed seventh in the Southeastern District for the season. They are the smallest school in the district. Parker said she hoped some of those 2-1 losses the team had this season had gone the other way.

“I believe the season we had taught the girls a lot of lessons,” she said. “I believe it has motivated the returnees to work harder in the offseason so that we can come back stronger next season.”

The Lady Cavs also had three girls — Sarah Stansick, Allison Thompson and Ashton Moore — make the all-district team. Parker described it as fulfilling watching her players earn individual awards. Lakeland did not do as well as it hoped in the district, so for its players to get recognized against very good competition was rewarding.

“I believe everyone worked very hard at their positions,” Stansick said. “We showed a lot of growth from the beginning and learned a lot throughout the season. We were always ready for the next challenge. I loved playing with this team.”

Next season, Lakeland expects to return an experienced team. They will have six seniors, two juniors and two sophomores, all with varsity experience.

“It has been very enjoyable watching this group we had this season continue to learn the game and grow into their skills,” Parker said. “I am definitely excited about next year.”