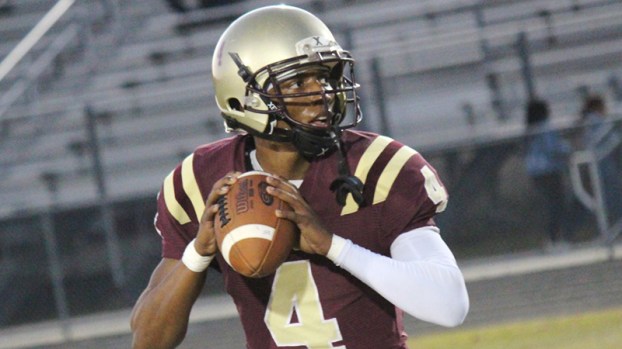 KF ‘empties the tank’ in upset

The King’s Fork Bulldogs celebrated one of the wildest and most memorable wins in the school’s 14-year history on Friday night when they beat Oscar Smith 29-23 in a thriller before a packed home crowd.

King’s Fork’s win snapped the 99-game Southeastern District winning streak by Oscar Smith, a perennial state power that suffered its first loss to a school from Suffolk or Chesapeake since 2006.

On Senior Night, quarterback Justin German threw for 325 yards and two touchdowns – the eventual game-winning score coming with 1:14 to play, when he found receiver Cherrod Joe for a 53-yard strike on fourth-and-10. That gave the Bulldogs the lead, which they extended for the final margin after Chris Shearin ran in a successful two-point conversion.

“We preach ‘Pound the Rock,’ Joe said. “When there are tough situations, we keep pounding the rock. That was our mindset going into that last drive. The safety came down. I jumped up, caught it, and another defensive back came. What I needed to do for us to win was score. I cut outside, and I scored.” 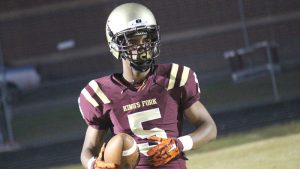 “We’re a second-half team,” he added. “We know we always have to finish. We’ve been dreaming about this since our freshman year.”

With 2:14 to go in the game, King’s Fork was one stop away from winning. However, Oscar Smith wasn’t ready to throw in the towel as the Tigers struck when their quarterback spun away from a Bulldogs defender who nearly sacked him and threw a 56-yard touchdown pass on fourth-and-11. That puts the Bulldogs behind 23-21.

German and his King’s Fork teammates were in the same spot in their comeback win over Deep Creek in OT, when he found Bobby Boone for the game-tying touchdown. He completed three passes — two of them to Sam Dunn and one to Darran Butts — before Joe’s scoring reception.

“I told myself that we’ve been through this, just last week. Why can’t we do it again? Even though it’s Smith, it doesn’t matter to us. They’re human just like us,” said German, who missed the playoffs the past two years because of injuries.

“I came in this week saying I’ve got to stay healthy,” he added.

“I’ve been injured the last two seasons. I have a heck of an offensive line blocking for me, heck of a running back, great receiving core and great defense. So I knew my brothers were going to have my back. Cherrod came up with a heck of a catch and a touchdown. I couldn’t ask for more.”

But even after King’s Fork’s go-ahead touchdown, the Tigers nearly stunned the Bulldogs with a 56-yard return on the ensuing kickoff to the four-yard line. T.J. Hart made a game-saving tackle on the return.

Hart, Devin Chambliss, Dennis Whitehead and Bryan Walker were responsible for crucial stops in the closing seconds as the Bulldogs kept Oscar Smith out of the end zone.

“T.J. Hart is an amazing football player. He just sells out,” said King’s Fork football coach Scottie Littles. “He went from safety, to linebacker, back to safety and plays linebacker when we need him. He’s a great football player and great leader who’s versatile and works hard.”

“It’s nerve-wracking as a coach during the game on the sideline, but I’m proud of our kids,” Littles added.

“Our kids just kept fighting. When we needed plays, we got them. When we needed a play in the passing game, Chris Shearin and Cherrod Joe gave it to us. People may not know that Darran Butts was banged up, but he played his heart out. I told the kids, ‘You’ve got to empty the tank,’ and they did.”

“He knows this offense like the back of his hand,” he said. “We might call a play on the sideline, but if he sees something, it’s to the point where he puts us in the right play. For 325 yards against that defense, that’s pretty impressive. A lot of his receivers went up and made plays for him, too.”

“It’s such a great team win in a great atmosphere. What a building step for this program.”

The Bulldogs knew the storyline for most would be about Oscar Smith’s streak, yet they wanted to create one of their own and capture some hardware along the line.

“At the end of the day, if we leave it all on the field and we empty the tank and it doesn’t go our way, at least we emptied the tank. But if we empty the tank with our talent, we’ll take our chances against anybody. I’m happy for our program; my administration, who’s non-stop supportive; and my wife, who’s always supportive. It’s a good moment.”

With the win, King’s Fork heads into the playoffs at 9-1 overall and the No. 1-seed for the Class 4, Region A playoffs that begin next week. The Bulldogs will play host to either Jamestown or Woodrow Wilson on Friday in the first round.

Anaya Godfrey was voted Suffolk News-Herald Player of the Week after scoring a goal and making many other plays for... read more