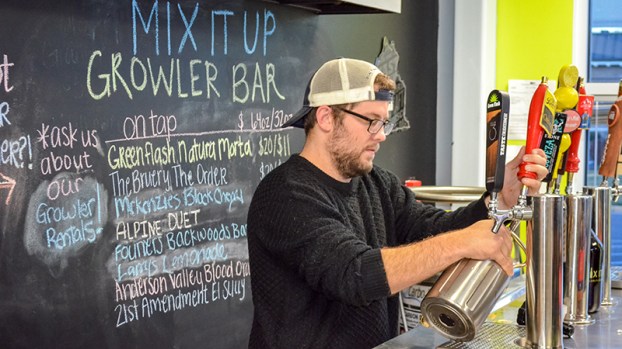 Coleman Ferguson, 29, fills a growler at the Mix It Up beer and wine store he opened with his wife Kimberly Ferguson on Harbour View Boulevard on Oct. 21. Alex Perry/Suffolk News-Herald

A new shop in North Suffolk is making a splash through convenient service and a tasty selection of beverages.

Amberly and Coleman Ferguson from Virginia Beach opened their second Mix It Up wine and beer shop on Harbour View Boulevard on Oct. 21.

The couple have had great success at their first location by the ABC store on Shore Drive in Virginia Beach, and wanted to seize the opportunity when retail space beside the Harbour View ABC store became available, Coleman Ferguson said.

While working for ABC, he saw a need for a shop adjacent to his former employers that offered something for beer and wine drinkers, plus mixers that may not be found at the liquor store, he said.

“Everyone was always asking for beer, wine and mixers, even people that shopped there regularly,” Ferguson said. “I thought there needed to be a store right next door for one-stop shopping.”

He said one of the biggest challenges was applying for specific ABC licenses, but that their sophomore effort turned out to be less of a hassle.

“Once we knew it, the second one was really easy,” Ferguson said.

Mix It Up sells 500 different brands of craft beers from 15 different distributors, along with 122 different varieties of wine, he said.

Stouts, lagers, ciders, IPAs and more fill the shelves. These can be purchased individually or mixed-and-matched for six-packs.

Chalk-drawn arrows on the wall point to ports, chardonnays, cabernets and other wines. The categories, specials and other information written in chalk were inspired by the now-closed Jewish Mother restaurant in Virginia Beach, Coleman Ferguson said.

“We really liked that,” Ferguson said about the restaurant’s aesthetics. “It really gives it a hand-done theme, and the chalk board is so easy to edit.”

Cocktail mixers, juices, sodas and snacks are also available for those that need something to go with their ABC store purchases next door.

“It’s got everything you need,” Suffolk resident Samantha Owen said.

Beer and wine tastings are offered all day, with varieties changing regularly, Ferguson said. Customers can also taste any of the eight different craft beers on tap.

“It’s hard to keep a growler on you at all times,” Ferguson said. “We didn’t want to lose a sale from someone having to buy another growler.”

According to Ferguson, Mix It Up has performed way above expectations in Suffolk.

“We were expecting it to be good, but it’s been great,” Ferguson said. “The Suffolk clientele is the best clientele we’ve ever encountered, just the nicest people.”

Mix It Up is open 10 a.m. to 9 p.m. Monday through Saturday and noon to 6 p.m. Sunday. It will be closed Thanksgiving. Call 977-1201 or visit facebook.com/mixitupsuffolk for more information.

A portion of Bob White Lane in Suffolk will be closed to public motorists beginning Tuesday. The section of Bob... read more