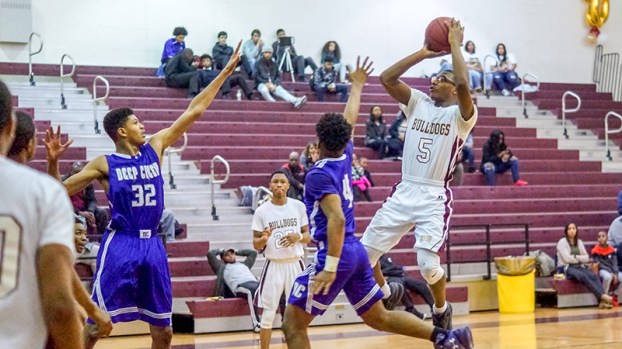 Senior James Hatton returns as one of the leaders for the King’s Fork High School basketball team this year. Caroline LaMagna Photo

With basketball season now upon us, some teams will have a different look when they step on the floor, and King’s Fork High School will be one of them. After 13 years under the direction of Josh Worrell, the Bulldogs will see Rick Hite take the sideline as their new leader.

Last season, the Bulldogs finished the year second in the Conference 17 during the regular season, but fell in the conference tournament, which ended their season.

Soon thereafter, Worrell stepped down as the head coach of the boys’ basketball team. Hite is not trying to come to King’s Fork and rebuild a program but wants simply to add on to what Worrell has already done and accomplished for the program.

“Coach Worrell has done an incredible job here,” Hite said. “The kids understand the tradition he has built at King’s Fork. I just want to continue to keep this program up as one of the premier programs in the state in a little different way. I am appreciative of all coach has accomplished.”

This season, the Bulldogs will be without all-region big man Raemaad Wright as well as a solid guard in Omar Skinner due to graduation. However, they do return standout senior James Hatton. Hatton will be the lead guard on a perimeter that will also feature returners Leontre Bailey, Kevin Williams and Lakeland High School transfer Keontae Boyette. Hite believes the perimeter will be the bread and butter of how King’s Fork will operate offensively this season. Byron Lawrence and Sam Dunn will add a nice mixture of an inside presence. Dunn is currently in football season for the Bulldogs.

Hite also coached the boys’ volleyball team this season. Most of the team was made up of basketball players, and Hite believes the opportunity to coach these same players since the fall season has helped build chemistry.

“One of the things we were trying to accomplish was trying to get to know each other,” he said. “There are certain things I wanted to instill in them, like discipline, and coaching a few of those guys gave us a good opportunity to do so.”

There will be the possibility of growing pains this season as the players and the coaches get adjusted to one another. Also, the Bulldogs may not have their whole team together in the first few games, with the potential of football season continuing.

“Wins or losses, we are just going to continue to do things the right way,” Hite said.

King’s Fork will host Indian River High School on Dec. 1 for the first official game of the season.

Lakeland High School boys’ basketball coach Clint Wright is optimistic about his team this season, despite inexperience. Lakeland gets its... read more