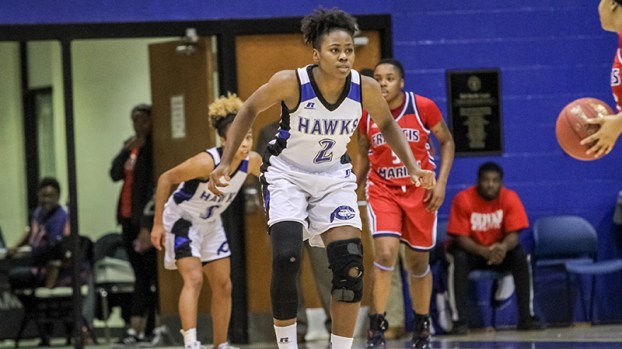 Roberts said she could not believe that she had scored that much.

“We were at a tough point in the game, and I was in my own zone, because I didn’t want to lose,” she said. “Every shot I took, I could hear my teammates cheering me on before the ball went through the net. I was just feeding off their energy while I was focused on getting us back in the game.”

A big week last week led to Roberts being named the CIAA Player of the Week on Tuesday. It was the first time she was recognized for the award. She averaged 21.3 points in three games and led Chowan to a 2-1 record for the week last week. After scoring the career high, she followed that up with 22 points and then 13 points as Chowan picked up wins against St. Augustine College and Fayetteville State University.

Chowan is currently 7-1, and Roberts is second on the team averaging 16 points while adding an average of 7.6 rebounds per game. A goal of hers this season was to leave everything on the floor and play without fear, and through eight games, it looks like Roberts is well on her way to doing that this season. She described her 29-point game as an eye opener for her.

“I am now more confident in my shot,” she said. “I plan on continuing to work hard so I can surpass that performance.”

Roberts’ parents are proud of all she has accomplished as well.

“She works really hard,” Roberts’ mother, Lisa Roberts, said. “She is enjoying herself out there she not holding back anything. She is just going out there and playing.”

“For some people, things come natural, but I had to work hard to get to where I am now,” Chantel said. “I have fallen in love with my potential and won’t stop striving until I am considered great.”

The Nansemond River boys’ basketball team is looking to improve on a five-win season from last year. The team tips... read more