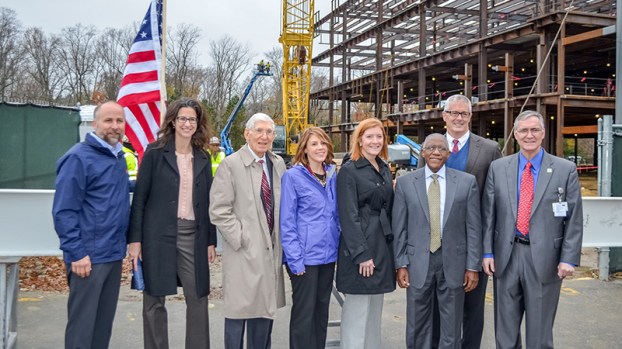 A milestone in the construction of a new medical services building at Sentara BelleHarbour was celebrated with a “topping off” ceremony on Wednesday.

Hourigan Construction broke ground on the $34-million, 85,000-square-foot building in May. The building is expected to open in early 2019 and will include an ambulatory surgery center with two operating rooms, an expanded emergency department, 14 patient observation beds for patients and additional office space, according to a press release.

There will also be an FAA-registered helipad to facilitate helicopter ambulance transportation for emergency patients. Sentara Nightingale Regional Air Ambulance will be able to transport patients from BelleHarbour to Norfolk General in about eight minutes.

“The idea is to bring everything into one location,” said Dr. Steve Julian, president of Sentara Obici Hospital and its subsidiaries, Sentara BelleHarbour and Sentara St. Luke’s in Isle of Wight County.

Sentara BelleHarbour currently includes a 24-hour, ambulance-accessible, free-standing emergency department, according to the press release, and the expansion will increase the number of treatment spaces from 17 to 22.

The four-story building will be positioned on the parking lot in front of the current, three-story Sentara BelleHarbour facility. The two buildings will be connected on the first floor, and replacement parking spaces will be added to the campus.

For the “topping off” ceremony, a steel beam with an American flag and a green tree on top of it was raised high and signed by Sentara personnel, members of city government and others in attendance. Julian encouraged guests to grab a marker and leave their marks.

“I’m not sure it will ever be seen again by the rest of us, but that’s one of those things where you’ll know it’s there,” Julian joked. “You can tell your children about it and your grandchildren.”

According to the American Institute of Steel Construction, “topping off” — or “topping out” as it’s sometimes referred to — signals that the final steel beam is going into place and the structure has reached its full height.

For some in attendance, it was a testament to the construction progress made in the past seven months.

“We call this a ‘topping out’ ceremony,” said Rabbi Phillip McNeal of Temple Beth El on Bridge Road, which leases the BelleHarbour land to Sentara. “I call it a ‘crowning out’ ceremony, because this is certainly a crowning achievement over the last seven months.” McNeal said.

More than a dozen volunteers from the Nansemond River Preservation Alliance, Suffolk high schools and elsewhere toiled by the pier... read more