Lakeland High School had another player enter the record books this fall. Keonte’ Cobb, a sophomore, had an impressive year on the gridiron. He finished the 2017 campaign with 16 sacks, which is a new Lakeland High School record. The previous record was 12 sacks. 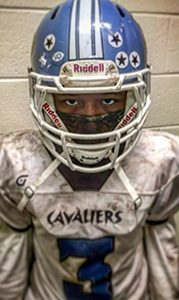 Cobb recorded three sacks in multiple games this season. Cobb seemingly flew under the radar this season for the contributions he had, but no one around him was surprised.

Before the season started, his coaches knew he could have a big sophomore year. They saw something in Cobb that could significantly help the defense this season after he was moved up to play varsity during his freshman season. The offseason work he put in gave Cobb enough confidence to know he could do something special.

“I knew my time was coming,” he said. “I trained so hard, and my coaches held me to high expectations. Coming up as a ninth-grader and getting that early experience had me ready and hungry to be great.”

A big part of Cobb’s success has been his support system of his family and friends. They cheer him on every game. The energy they bring to games motivates him to go out on the field and give them a show.

“I love it. It gives me something to play for,” he said. “I know I can’t let them down, so I always want to give them a show. I have a great fan base from my mom, stepbrothers, friends and cousins.”

Having a 16-sack season could immediately put a player on the radar of colleges, and for Cobb it did. Because of college recruiting rules, Cobb can’t actively be touted until after his sophomore season. Coaches have him on their radar, and his goal is to go to an NCAA Division-I college.

Cobb didn’t get selected to any all-district teams, but he was an honorable mention for the Class 3 Region A team. He did receive a team award from Lakeland.

Overall, he felt he accomplished a lot this season. He has big goals for next season, including to try to double up on all that he did this season.

“I think I accomplished a lot this season with the training and support of my defensive coach,” he said.

After competing in a holiday tournament over the weekend, the Lady Cavs are ready for district play. District play begins... read more