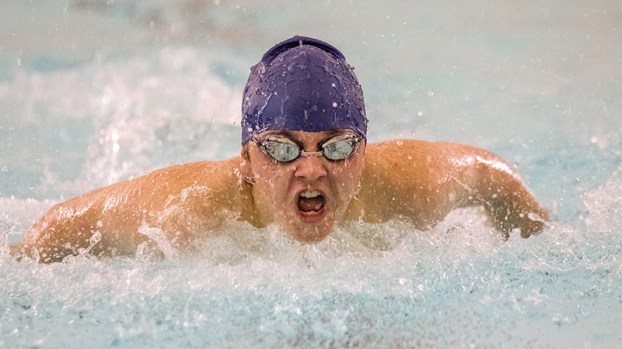 Cole Matern swims in the 100 butterfly for the Lakeland Cavaliers. The team had a successful meet against King’s Fork High School on Saturday, beating them for the first time in school history. Jeremy Brant Photo

The Cavs swim team got its first win of the season last Saturday when it faced off against King’s Fork. It was also the first time in school history Lakeland had defeated another Suffolk school. The Lady Cavs were also close to a victory but came up short 88-71. Their score was the closest they had come to defeating a Suffolk team.

Lakeland coach Beth Brant was proud of both teams’ efforts, considering how limited they were in preparation.

“This meet was challenging due to not many practices for the past month due to winter break and the snow,” Brant said. “The boys have been consistently putting forth a lot of effort this season and, despite the break, weren’t too far off their best times, for the most part.”

Brant believes that the meet against the Bulldogs was the first meet that her girls’ team as a whole rose to the challenge. She is also excited to see how the team will build on these performances going forward.

“I am proud of their performance,” Brant said. “I am excited to see what they will grow to accomplish the remainder of the season.”

The swimmers who returned this season are at or better than their times from last year. They came into the season keeping their goals realistic. Brant wanted her swimmers to focus on improving their individual times rather than the team’s record. In regular season meets, Lakeland will always be facing bigger schools because of its classification.

Lakeland will swim against Deep Creek High School at 6:45 p.m. Thursday if the weather allows.