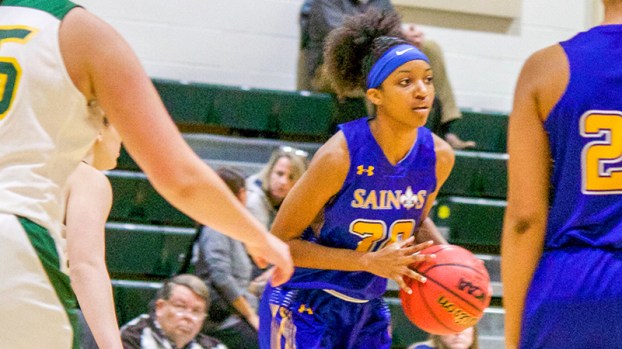 Alivia Giles looks to make a play for the Lady Saints. The Lady Saints came in at No. 6 in the weekly Virginia Independent Schools Athletic Association Division II state poll. (Anthony Giles Photo)

Lady Saints No. 6 in weekly poll

The Nansemond-Suffolk Academy girls’ basketball team came in at No. 6 in the Virginia Independent Schools Athletic Association Division II poll.

The Lady Saints came in at No. 6 in the third VISAA D-II poll. The Lady Saints are 13-5 and have played well over the course of January. They have won 10 of the last 11 games and have a streak of seven games where they won by at least 20 points. With about two weeks left of regular season play, NSA has a chance to move up in the rankings potentially within the top five.

Only one loss has been to a team in the same D-II classification as NSA. Back in December, Coach Kim Aston talked about how she tweaked her lineup to incorporate a freshmen-heavy starting lineup and, so far, it looks like it has paid off. NSA can look to close out the regular season strong with these last few games.

Nansemond-Suffolk Academy competed in the January Jam Showcase over the weekend and grabbed a win. NSA competed in three games... read more