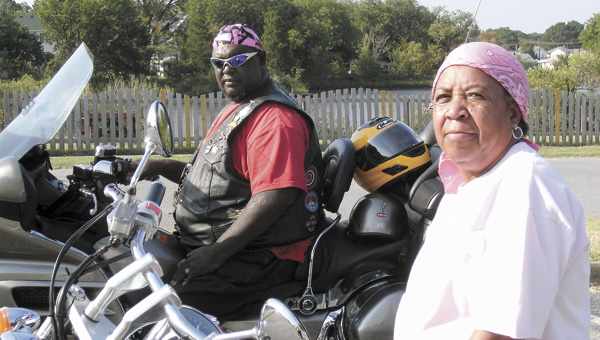 Shake hands with Duke Garner of Portsmouth and you immediately see, and feel, why friends call him “Supersize.” The president of the Thunder and Lightning Motorcycle Club is a big guy with a big motorcycle, a full-dress Honda Goldwing.

But don’t let the leather vest and club colors fool you.

Supersize is a gentle giant who wants to save lives and educate women and men about breast cancer through the eighth annual “Rolling for Life” charity ride on Oct. 2, 8:30-10 a.m. It begins at Aggressor Custom Cycles in Portsmouth and ends at Sentara BelleHarbour in Suffolk, after winding through Isle of Wight. Entry is $10.

The retired school security officer brings a unique perspective to the event.

“I had to have a mastectomy,” Garner says matter-of-factly.

It was a precautionary procedure after medication he was taking for a pituitary tumor back in the ‘90s caused lactation, painful infections and dozens of small tumors in his breast tissue. The resulting biopsy found some of the tumors benign and some inconclusive, but no one on his medical team doubted the wisdom of performing a mastectomy on the man.

The hardest part, Garner says, was his first mammogram.

“People looked at me like, ‘Does he know where he is?’” Garner recalls.

But he says he received only warmth and support from the nurses and physicians who worked with him through the difficult, sometimes painful, process.

He also got support from an old junior high school friend, Eunice McMillan, a teacher he ran into for the first time in 15 years while working campus security.

McMillan is a member of The Virginia Breast Cancer Foundation, the organization that benefits from the annual ride. She’s also a Thunder and Lightning member, and she uses her Honda Shadow Spirit 750 as a conversation-starter to talk to people about breast cancer.

“They make noise, and the whole idea is to get people’s attention so they’ll come up and talk,” McMillan says, “Whoever you reach, it’s the right people.”

McMillan says one goal of the foundation is to educate women about the resources available to help them receive mammograms and free or low-cost medications should they receive a diagnosis.

“They’re so scared,” McMillan says. “We put them in touch with survivors to alleviate their fears and let them know how they can get the care they need.”

“It’s support, it’s medications and it’s the grace of God that gets you though cancer,” McMillan insists. “You give what you can.”

Duke Garner is in a very small fraternity of men who experience breast cancer.

Authoritative estimates predict fewer than 2,000 cases of breast cancer in American men during 2010. Compare that to more than 192,000 cases predicted in women.

For this reason, the Virginia Breast Cancer Foundation puts its resources into reaching as many women as possible with information.

“We make presentations to church groups, clubs, family reunions and anyone else who invites us to talk about breast health,” says Tuwanna Okafor, a member of the foundation’s board of directors. “We’re about awareness and advocacy,” Okafor says, “and support when women need it.”

Despite recent controversial studies, the Sentara Cancer Network still recommends that women over 40 receive annual screening mammograms. Women younger than 40 should get them if they fall into higher-risk groups through a family or personal history of breast health issues.

Those risks can be measured through high-risk assessment programs such as those at Sentara Williamsburg Regional Medical Center, the Dorothy G. Hoefer Center at Sentara Port Warwick in Newport News and the Sentara Leigh Breast Center in Norfolk.

The 2010 “Rolling for Life” event will be a Poker Run with a twist. Rather than starting off riders in staggered fashion over 60 or 90 minutes, they’ll try to make it a group ride to the extent possible, to maximize the impression on the public and to maintain a sense of purpose among participants.

Stops for cards will include Sentara Obici Hospital in Suffolk, the Sentara St. Luke’s campus on Brewer’s Neck Road in Isle of Wight County and Suffolk Rescue 5 on Route 17, with a final stop at the Sentara BelleHarbour campus on Route 17 for refreshments, door prizes and announcements.

As he puts his energy into the upcoming event, Duke Garner is battling a new health crisis. He was diagnosed in 2005 with yet another cancer, multiple myeloma, the same disease that killed his brother in 2000. But Garner is focused on his volunteer work for the Virginia Breast Cancer Foundation.

“God is a good God,” Garner insists. “I’m still here and still trying to save some folks.”

Dale Gauding is a spokesman for Sentara Health Systems.