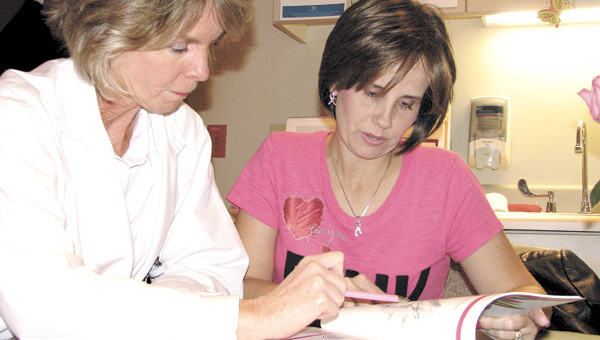 Michelle Barrett, a mother of three and a Navy wife, is used to making hard choices and putting together a tough game plan.

When told she had breast cancer at the age of 37, it was another story.

“When I was told I had breast cancer, I was in shock,” Barrett said. “For a mother, you get that feeling in the pit of your stomach — the same one you get when you’re in public and you look down and your child is gone. I didn’t know what to do.”

That shock went on the next few days, and she didn’t do any research because she was scared of what she would read.

A few days after her initial diagnosis, however, she met with Pam Thornton, Sentara Obici Hospital’s breast cancer patient navigator, who had contacted Barrett the day after her diagnosis.

“I walked into her office like a zombie,” Barrett said. “I just was trying not to cry. I was still in shock. All I knew was that I had invasive breast cancer.”

Thornton has been a breast cancer navigator with Sentara for three years. Previously, she administered chemotherapy as a nurse.

Through increased awareness and research, many health facilities now have breast cancer navigators to help the women start down the road to recovery.

At Sentara, patients are referred to Thornton through their doctor or surgeon after an initial diagnosis is made.

“Then I make contact to introduce myself,” Thornton said. “It’s a scary time for them, and chances are they’ve never been through this before. It’s my role to walk their breast cancer journey with them.”

Thornton’s role as a navigator includes increasing patients’ knowledge of breast cancer, helping them make sense of the reports and exams their doctors give them, getting answers from doctors when needed, reviewing their options for treatment and talking to their family members.

“She explained to me what invasive breast cancer was and helped me understand that the tumor doesn’t grow that fast in a few weeks so I don’t have to be so worried about getting it out immediately,” said Barrett, who had surgery about five weeks after diagnosis. “It takes a very special person to do a job like that.”

As a navigator, Thornton does more than act as a information resource. She calls her patients to check up on them, always has her cell phone on and has an open door policy. “There are days when you don’t want to see anyone or do anything, and there are other days when you can’t no matter how much you might want to,” Barrett said. “It’s nice to know that someone else is looking out for you when you disappear from the world.”

Another role of a navigator is to be there before and after surgery and other procedures.

“One of the scariest things for me was my MRI,” Barrett said. “I was absolutely scared to death. She let me know what to expect and went back with me.”

Thornton said that navigators also help with transportation and billing issues patients might encounter during treatment.

A navigator’s job doesn’t end after treatment is over. She keeps in touch to ensure they’re still living healthy lives and taking care of their bodies.

“We keep in contact through their survivorship,” Thornton said.

With Thornton by her side, Barrett is halfway through her chemotherapy and reconstructive treatments.

“When everything gets so dark and you have no hope, she’s been there to tell me it will be OK,” Barrett said. “She’s become a friend to me and a parent to lean on. This is such an important position that every hospital should have and every woman should seek out.”