A tour of Chuckatuck’s history 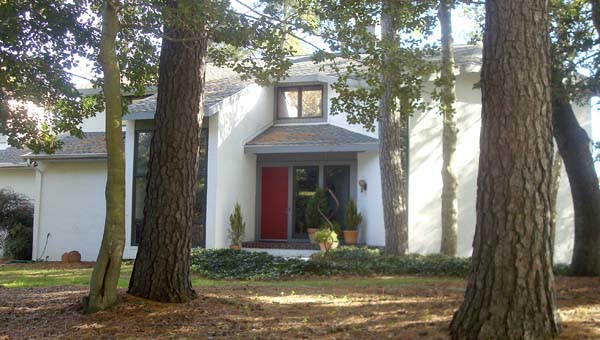 The Eure home is one of the five homes open to the public during the Suffolk-Nansemond Historical Society’s 34th annual Candlelight Tour. It sits on the old Cherry Grove Farm land on the Chuckatuck Creek.

More than 300 years ago, the Chuckatuck Creek provided daily sustenance for the families that lived on its banks.

The history and stories the river holds today are as rich as its banks and waters once were.

To highlight the history and educate the public, the Suffolk-Nansemond Historical Society will hold its 34th annual Candlelight Tour along the Chuckatuck Creek Dec. 4-5 from 2 to 6 pm.

“Chuckatuck is older than the town of Suffolk, which was chartered in 1772,” said Sue Woodward of the Nansemond-Suffolk Historical Society. “Smithfield was chartered in 1752, but when George Fox the Quaker came through in 1672, there was a village in Chuckatuck. They were some of the first people here and the area has become an important part of our history.”

The homes on the tour include The Phillips Farm, Cotton Plains Farm, The Eure Home, The Cherry Home and The Harris Home.

The Phillips Farm, 6353 Godwin Blvd., sits on the Suffolk escarpment — a unique land feature that some believe is the shore of an ancient sea.

“It’s believed to run up into the peninsula and all the way down to North Carolina,” Woodward said.

The home was purchased by Mr. and Mrs. Ed Bickham in 1979 and was refurbished. It now is on the National Register of Historic Places.

Cotten Plains Farm, 696 Cherry Grove Road, was part of the original Godwin land grant from the 1600s. It was built by one of the Godwins between 1780 and 1800. By 1954, when the Barlow family bought the land, the house had become a storage shed and lost its chimneys. It has since been restored and renovated and is the center of Mr. and Mrs. Joseph Barlow’s working farm.

While the other three homes on the tour are not historic, the land where they sit is rich in history.

“We thought we’d mix things up a little bit this year,” Woodward said. “We’d love to show modern structures and discuss the history, as well.”

The Eure Home, 1882 Cherry Grove Road, is near the site of the old Godwin farmhouse and on what was Cherry Grove Farm. It is now owned by Mr. and Mrs. John D. Eure Jr.

The Harris Home, 1725 Cotton Farm Lane, is on the Cotten Farm and will feature the artwork of Barbara Harris who uses the home’s broad view of the Chuckatuck Creek as inspiration for many of her works of art.

The Cherry Home, 1833 Cotton Farm Lane, sits on more than 20 acres and overlooks the Chuckatuck Creek and marsh.

The Harris Home and Cherry Home both sit on property that was once the farm where General George Pickett’s wife, Sally, was raised, according to Woodward.

Oakland Christian Church will also be open to the public. The church was founded in 1872, but the building was in existence prior to that. It was the church of Mills Godwin and on a throughway for most families and members.

This will be the 34th year the foundation has hosted the event to help preserve the history of the land in the hearts of its residents.

“I remember the first tour we did I heard a man say that he had lived in Nansemond County his entire life and had no idea [the history being shared] was in Suffolk,” Woodward said. “It’s our mission to show people how many amazing things are in Suffolk that they never knew about.”

Tickets to the two-day event are available for $18 at the Suffolk Visitor Center, the Suffolk Seaboard Station Railroad Museum, Kelly’s Nursery and A. Dodson’s.