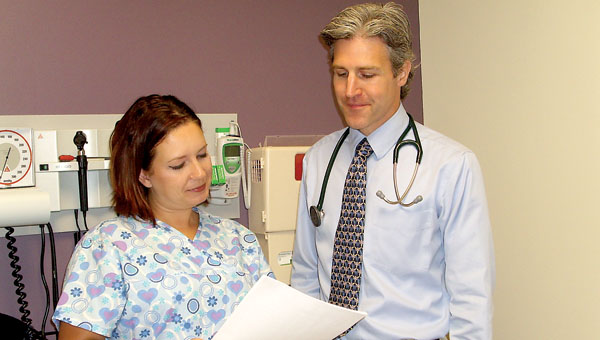 Norfolk has it, Williamsburg and Virginia Beach have it, and now Suffolk has it. Dr. Christopher Dowd has opened Cornerstone Private Practice on Bridge Road, bringing to North Suffolk an innovative choice in medical care — concierge medicine.

Also known as private medicine, direct care or executive health care, concierge medicine harkens back to an era when doctors practiced a more personalized kind of medicine. In those days, doctors had fewer patients, more time to spend with them, and thus an awareness of the details of their lives. The relationship between doctor and patient was not only professional; it was personal, as well.

This is what Dowd has in mind for his new practice.

“My experience in healthcare in Hampton Roads over the last decade has included the entire spectrum of care, ranging from traditional office practice to hospital care, from caring for young children to caring for long-term and skilled nursing care patients,” Dowd said.

“As a result, I have seen a lot of what’s good in medical care, and a lot that needs improvement. Cornerstone Private Practice enables me to provide the kind of care that I think every patient deserves.”

Dowd, who is board certified in both internal medicine and family medicine, had his first practice in Courtland, spent several years as a hospitalist in Portsmouth and Chesapeake and is an assistant professor at Eastern Virginia Medical School. He is married to Cynthia Corliss and lives in Suffolk with their five children.

He said that establishing a practice that addresses the problems of modern-day medicine has been his dream.

Concierge medicine has been compared to private education. Patients pay extra to get more of their doctor’s time, as well as services that are not traditionally covered by their health insurance, such as comprehensive exams, increased accessibility, longer and on-time office visits and enhanced preventive care.

Concierge medicine is popping up all over the country. It has been reported in cardiology, pediatric and dental practices, as well. Since 2004, Tufts Medical Center in Boston has offered its patients a choice between a traditional general medical care practice and a retainer-based practice.

“This kind of medicine has been called a lot of things,” Dowd said. “But it is best described as personal medicine. I believe it is the best way to provide comprehensive, whole-person health care tailored to the individual.”

Cindy Payne of Suffolk is one of Dowd’s patients. She is enthusiastic about Cornerstone Private Practice.

“I have been getting physicals every year since I was 25, and I’ve never had one like I had at Cornerstone,” she said. “Dr. Dowd went way beyond what any other doctor has ever done. I had every test imaginable — he even noticed that I have receding gums! He examined every little reflex, every little part of me! And he took the time to explain everything.”

Payne is a vivacious, red-haired, 60-year-old grandmother of five.

“It’s a time-clock thing,” she said of the difference between Dowd’s practice and other doctors. “Before now, I never could take the time to explain all my issues to my doctor. The visit with Dr. Dowd was longer than I’ve ever had, and I think that’s good, because he was getting to know the whole me and not just my symptoms.”

Payne said she believes that a lot of medical problems happen because people “don’t know how to verbalize some things, or they don’t even know that some symptom they’re having is important. Dr. Dowd takes the time to listen for such red flags so that he can deal with them before they get bad. I think that’s what people are looking for in a doctor.”

Dowd said that his practice will focus on preventive and proactive care, and helping patients achieve a healthy lifestyle.

Doctors who offer concierge medicine limit the number of patients they accept so they have more time for each one. The patient load for a traditional primary care doctor is typically between 2,000 and 4,000 patients. Dowd said he will only accept about 10 to 20 percent of that number, which will allow him time to offer enhanced services, such as direct phone and email access; same-day response; flexible appointments, including priority same-day and next-day; online scheduling; on-time care; and advanced diagnostic evaluation and testing.