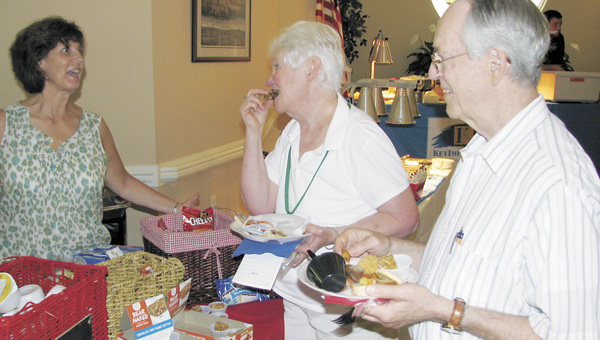 Vendor Debbie Gordon offers snack foods to Peg and Ray Cicirelli at the Lake Prince Woods food fair last Wednesday. The event was set up to allow residents and staff to sample items not currently on the menu and make recommendations for what they’d like to see in the community’s dining hall.

The fair, a first-ever event for Lake Prince Woods, brought in 19 vendors to allow residents to sample items that aren’t currently on the menu, said Susan Stone, director of development and public relations at the retirement community off Kings Fork Road. She said she got the idea from another community owned by United Church Homes and Services, which has done the food fair for several years.

“These are vendors that supply our dining room with food, and this gives our residents a chance to try things we’re not currently offering,” Stone said. 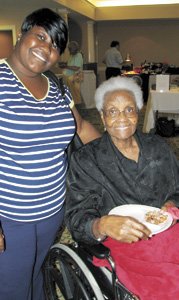 The offerings included everything from breakfast cereals and snacks to stuffed turkey breast and pizza to ice cream with toppings.

The hundreds of residents at the community eat at the dining hall at least a few times a month, Stone said. Those who live in the cottages get 10 meals a month with their residency, and many choose to eat there more. Those living in the apartments get 20 meals a month with the ability to choose more. Patients housed in the health care portion of the building eat food prepared by the dining hall for every meal.

Andrew Warren, area general manager for Sodexo, the food service vendor, said the event helped introduce new foods to the residents, who might be hesitant to try new dishes.

“This helps them try new things without being scared to try it,” he said.

Residents were able to give feedback on the items they sampled to encourage it being added to the menu. They also were able to special-order the food for their own use.

“This was designed mostly for our residents, but if we decide to do it again next year, we might expand it to more of the community,” Stone said.