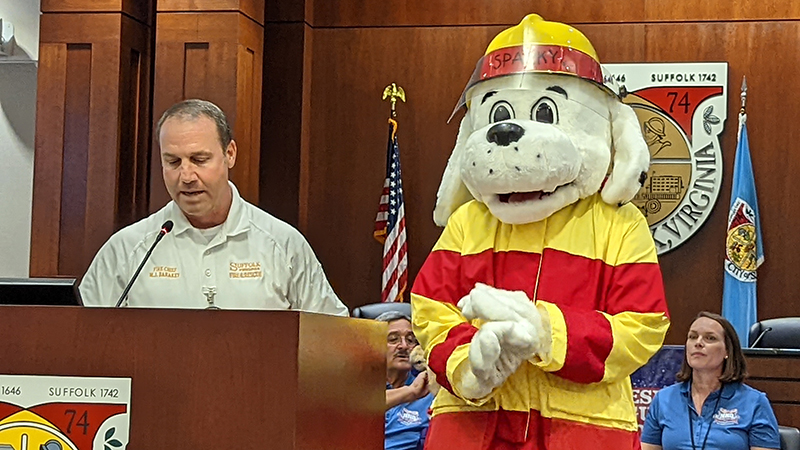 Fire Chief Mike Barakey, shown here during the National Night Out kickoff event at City Hall Aug. 2, addressed City Council Wednesday to give it an update on fire department initiatives and the level of service it is providing to the public.

Mayor Mike Duman had teased during a Facebook Live earlier in the week that the regular meeting agenda for the Aug. 3 City Council meeting was not too heavy, but with 14 speakers signed up for the non-agenda public comment period — many speaking on the Port 460 Logistics Park project — the work session and regular meeting combined still went more than six hours.

He did, though, give everyone a 15-minute break just before the second public comment period started and after the key votes for the evening had been taken.

Sleepy Hole Borough Councilman Roger Fawcett again participated in the meeting remotely due to illness and did not stay for the entire meeting.

Whaleyville Borough Councilman LeOtis Williams did not attend the meeting. Mayor Mike Duman said it was an excused absence.

Sarah Kelly, a director for Planning Next — the city’s consultant on the comprehensive plan update — spoke to council during its work session about where the development of the new plan stands in terms of stakeholder and public engagement, the technical analysis of it and integrating council’s thoughts on the plan, branded Suffolk 2045: Connecting Our City, Shaping Our Future.

Kelly said later this fall, it would test ideas in draft form and get more feedback, with more plan updates coming through the winter.

What has it heard? The city’s rural, small-town feel is one of its biggest strengths, there’s opportunity for downtown investment and revitalization, open spaces and parks are a big plus and there is a desire for well-planned residential and commercial growth in the northern part of the city. Kelly said these are just a few of the things it has heard.

What do you want to see in it? There’s still time for individuals to offer their thoughts through the latter part of September. Kelly said it is saving all comments, verbatim, and will be available to the public.

By a pair of 6-1 votes, council voted to approve a conditional use permit for an outdoor shooting range and a training school on property along Hosier Road. Vice Mayor Leroy Bennett was the lone no vote for both permit requests.

“It’s been a long time coming,” said Councilman Donald Goldberg. “I’m excited about it. It’s going to be great for downtown.”

That’s what he said after council voted 7-0 to approve rezoning of property at Lee Street from residential medium density to central business district zoning to move forward with building a new, larger downtown library to replace the Morgan Memorial Library.

In different ways, most council members shared a similar sentiment.

City officials expect that in less than a year, the Festival Park being put in downtown with the showcase entrance at the corner of West Washington and South Saratoga streets will be hosting events.

By a 7-0 vote, council approved a conditional use permit to establish a park/open space on the property at 219 W. Washington St. and 101 S. Saratoga St.

Chandler said he expects to have all of its Flock cameras up and operational by the end of the month. He received authorization for them earlier this year Read the story here.

He focused his briefing on the department’s crime scene investigations unit, which has four technicians and a supervisor and is responsible for processing major crime scenes for forensic evidence. They also engage the public through speaking engagements at schools and other groups, including this summer’s CSI Camp.  It has processed 142 crime scenes so far this year, has collected 1,720 items of evidence, and has processed 160 cell phones and 85 firearms, approaching pre-COVID-19 pandemic levels.

Chandler also focused on the technology the CSI unit uses in collecting and organizing evidence.

Barakey talked about Suffolk Fire and Rescue initiatives, such as the groundbreaking later this year of the new North Suffolk Fire Station 11 and a new, 107-foot ascendant ladder truck that he said would comfortably reach the roof of the new Amazon robotics fulfillment center in Northgate Commerce Park. A new apparatus storage building is expected to be finished by this fall at Fire Station 6, and the Carolina Road Training Facility’s burn building is estimated to be ready by 2024.

He noted it has 74 people on shift daily covering nine firehouses, the North Suffolk firehouse will be the 10th.

The fire marshal’s office, among its duties, investigated 270 fires last year and so far it has investigated 54. It also handles bomb threats or explosives threats, handling 14 of them in 2021 and has already handled 14 through June 30 this year.

Though the city’s farmers’ market continues to take place from 9 a.m. to 1 p.m. every Saturday through Nov. 19 at the Suffolk Visitor’s Center, it has since added bonus Wednesday summer markets from 3:30-6:30 p.m. through Aug. 31 at the same location.

And, beginning Aug 9, it will start a mini pop-up market from 2-5 p.m. Tuesdays on East Washington Street at the corner of Tynes Street. No vendors have yet been announced.

Here are public hearings coming up at council’s Aug. 17 meeting: